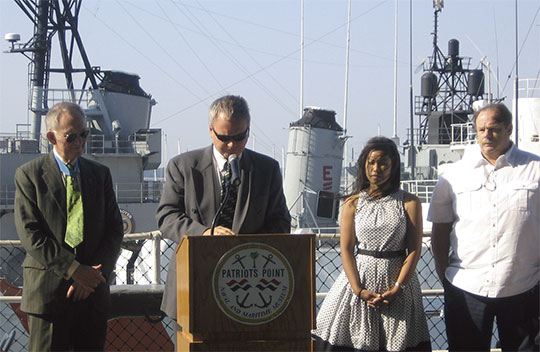 The 3rd Annual Trojan Labor American Hero Awards was held the morning of May 20th, 2008 aboard the USS Yorktown in Mt. Pleasant, SC. The United States Coast Guard began the ceremony with the presentation of Colors. The opening speech was made by company president, Dan McAnnar who spoke on the importance of recognizing our military especially during Military Appreciation Month. Mr. Kruger Smith, Mayor Pro Tem of Mt. Pleasant, then introduced the special guest speaker, Major General Livingston, USMC recipient of the Congressional Medal of Honor from his outstanding service in the Vietnam War. His remarks included high regards to all of the men and women who have fought in War on Terrorism. Sgt. Paul Ray Smith and Sgt. Bryan C Luckey were honored at the ceremony.

The Trojan Labor American Hero Award was presented to Mr. Mike McCrann representing the family of Sgt. Paul Ray Smith. Sgt. Smith was killed in the line of duty in 2003 and became the first soldier in the Global War on Terror to be awarded the Medal of Honor. US savings bonds were given to his two children in memory of their father.

The Trojan Labor Ultimate Hero award was given to Ms. Catherine Luckey wife of Sgt.. Bryan C Luckey who died on June 29th, 2006 from combat wounds received in Mosul, Iraq. Sgt. Luckey’s entire family from Tampa, Florida was in attendance. A monetary donation was given to the Association of the United States Army, Wounded Veterans Fund, in Sgt. Luckey’s name. The ceremony concluded with a speech from Trojan Labor CEO, Rick Hermanns commemorating our solders.